Two earlier blog posts (1) (2) covered how to set up Qt and Qt Creator on Windows and Linux systems. Let's look at installation on the remaining major desktop platform, macOS.

Thanks to the unified Qt installer, the process is very similar to that on Windows and Linux, so we'll just cover some of the differences and highlights of the Mac install.

For this example we'll install Qt 5.7.1, which is supported on macOS version 10.8 and later.

The C++ compiler used by Qt on macOS is the Clang compiler, provided as part of the Xcode development tool. You will need to install Xcode from the Apple App Store. It is a free download, but you will need to have or create an Apple ID. 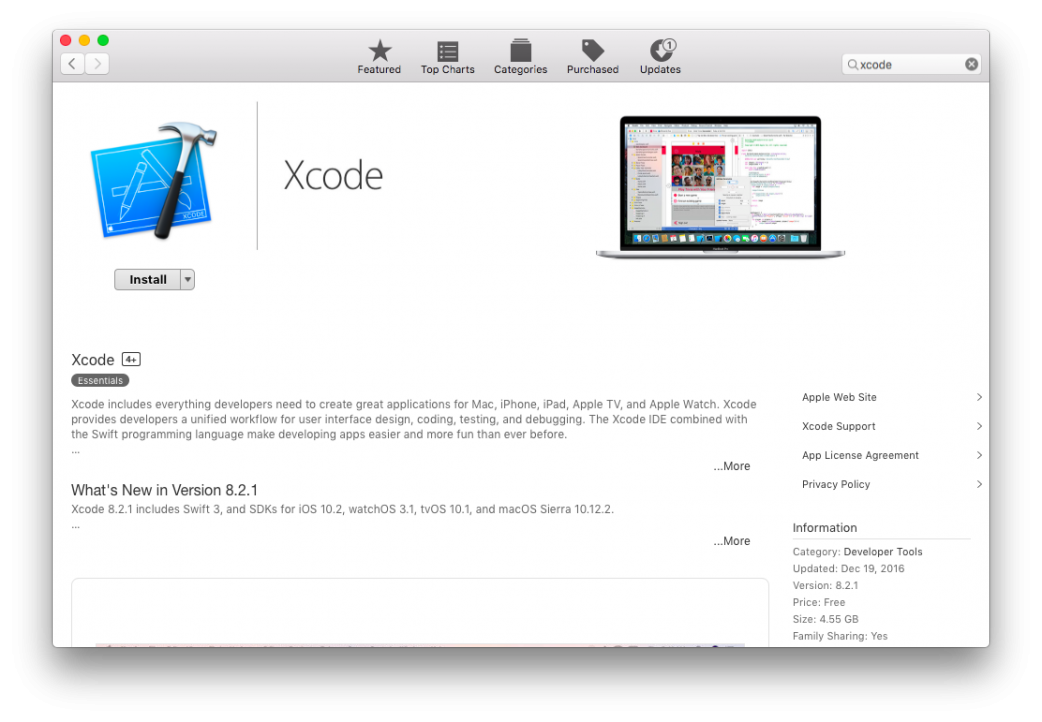 You can also use Qt and Qt Creator on macOS to develop for iOS (i.e. for iPhone, iPod Touch, and iPad devices), or for Android (or both). These use different downloads of Qt and have more prerequisites and won't be covered here. 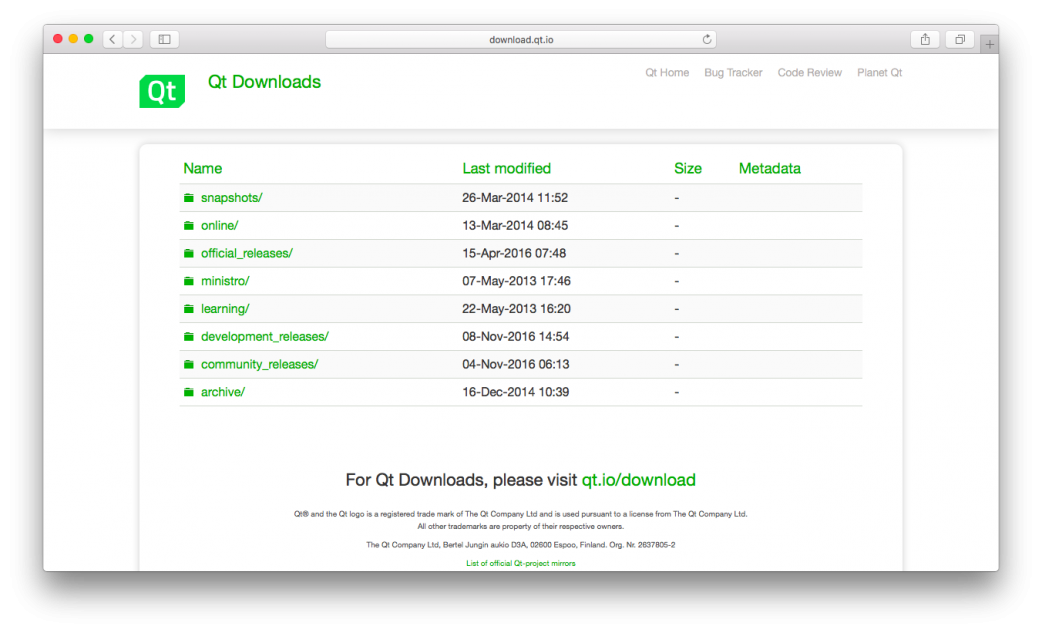 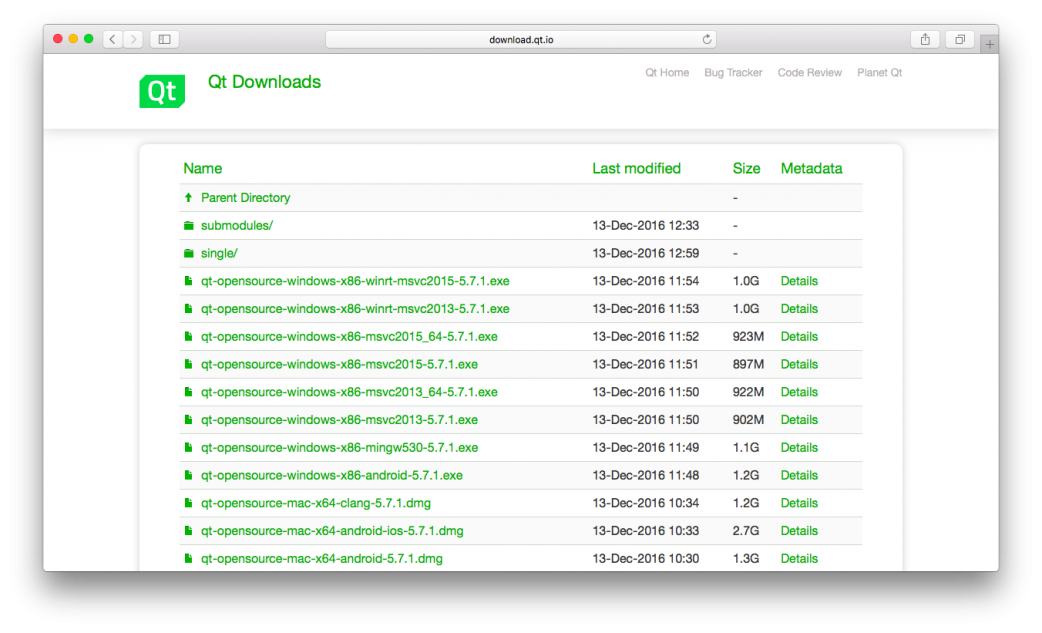 Once it has downloaded, open the dmg file: 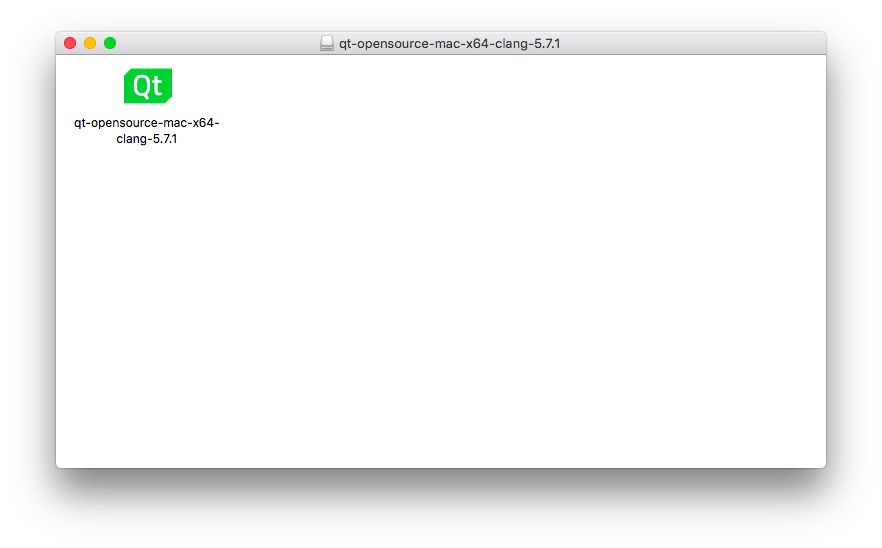 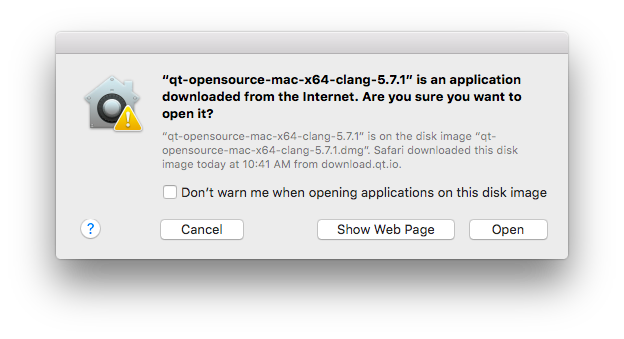 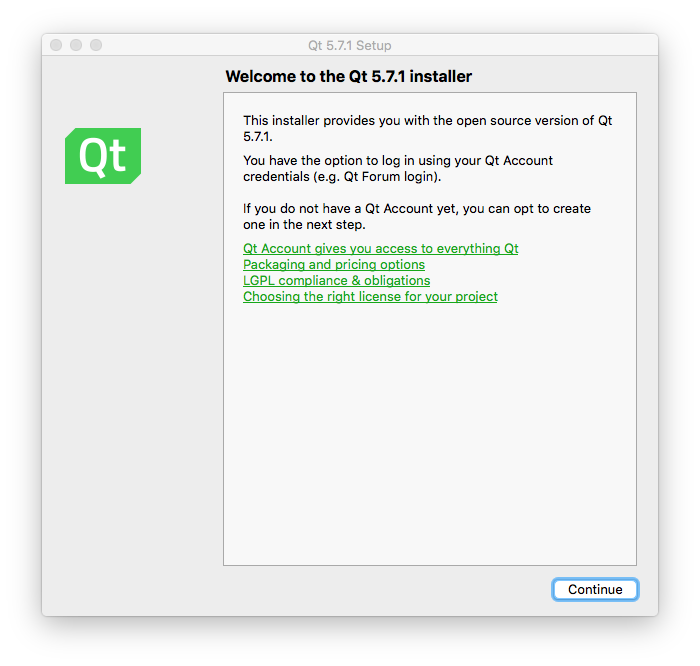 From the Qt Installer, follow the wizard screens in the same fashion as on Windows and Linux. Here were the screens I stepped through: 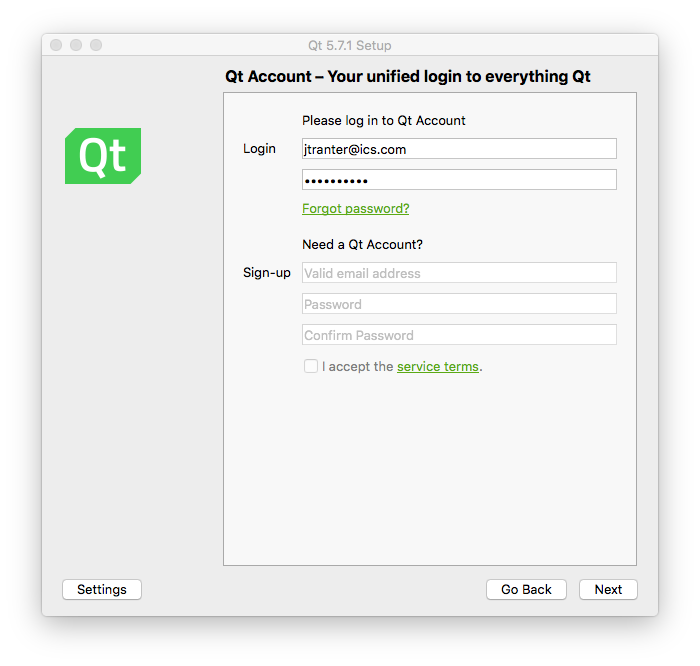 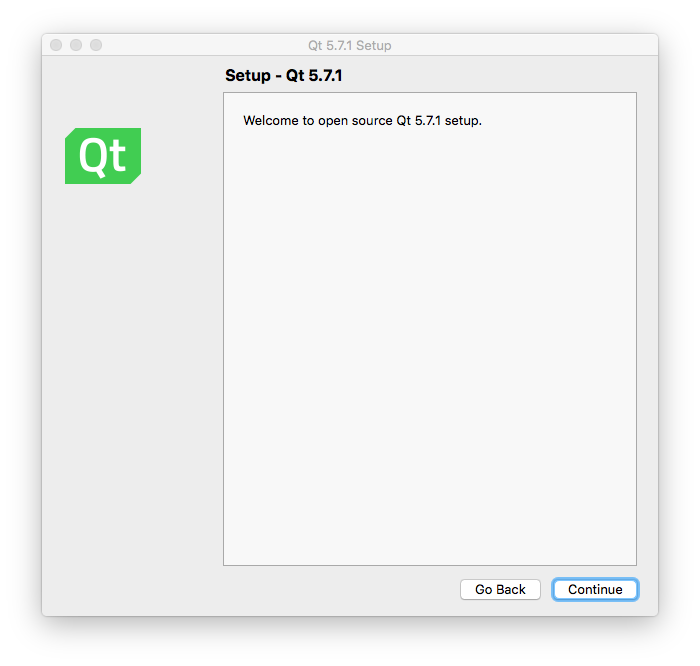 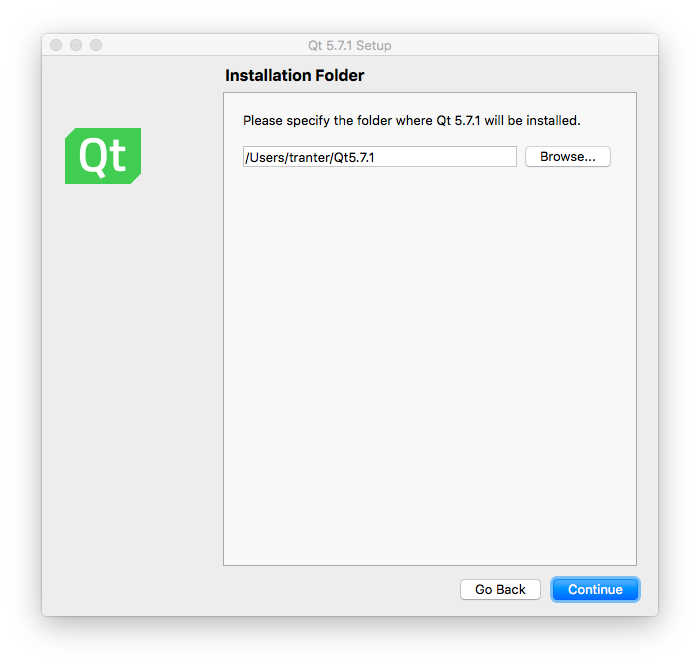 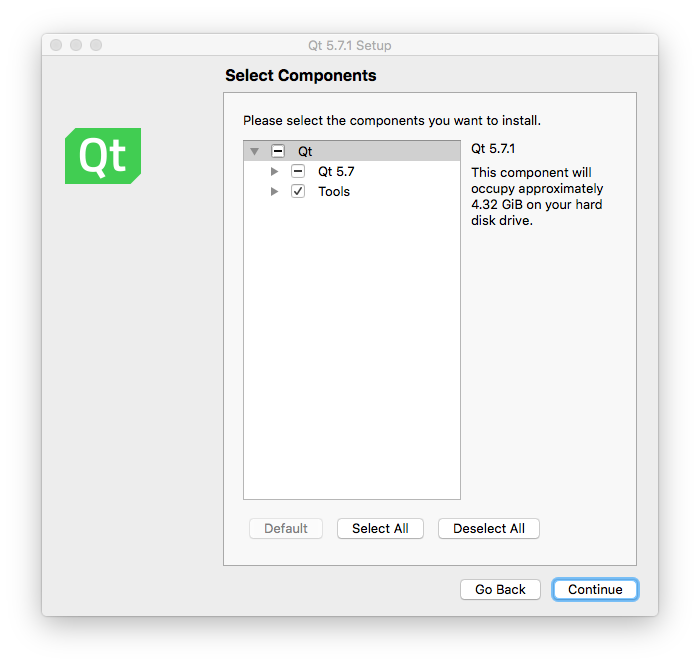 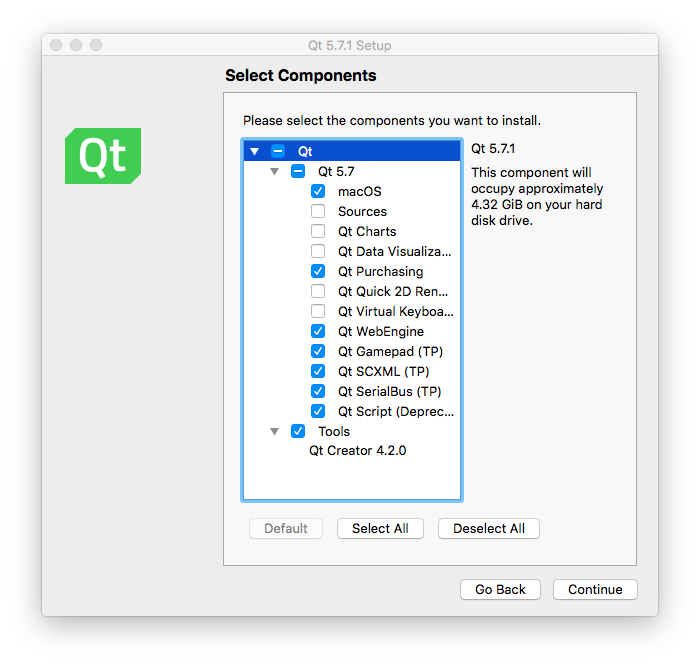 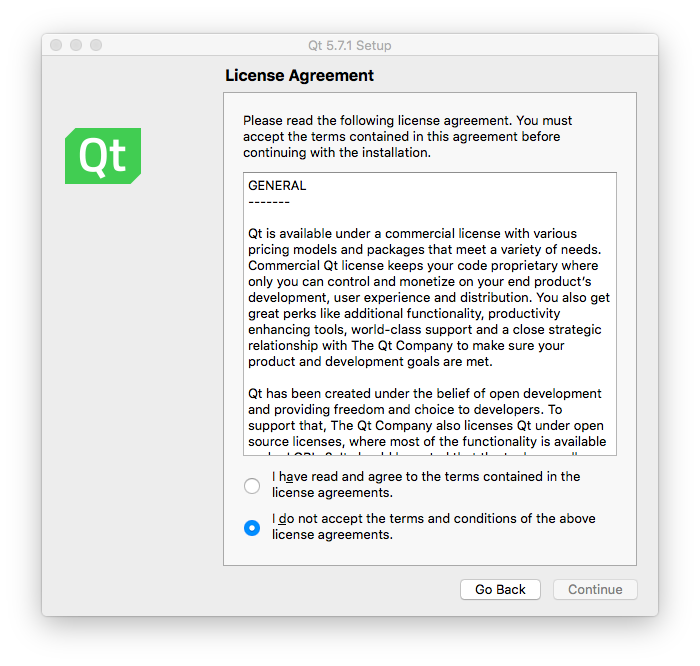 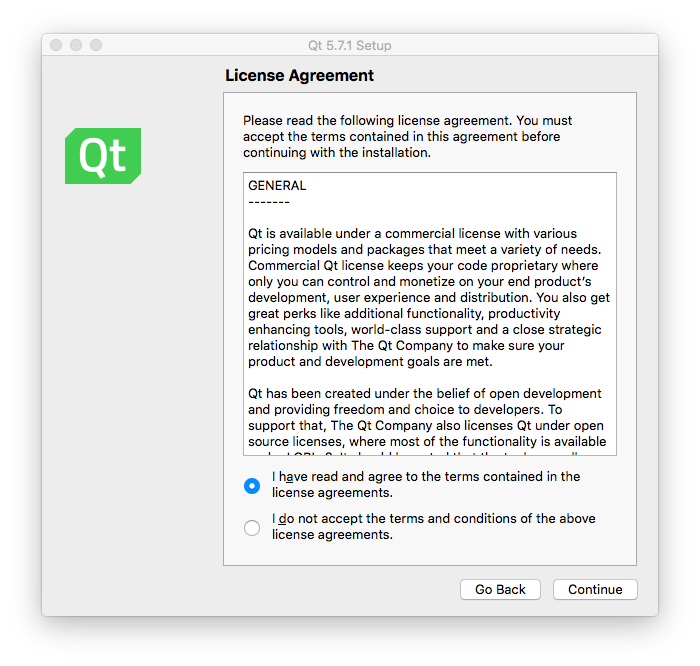 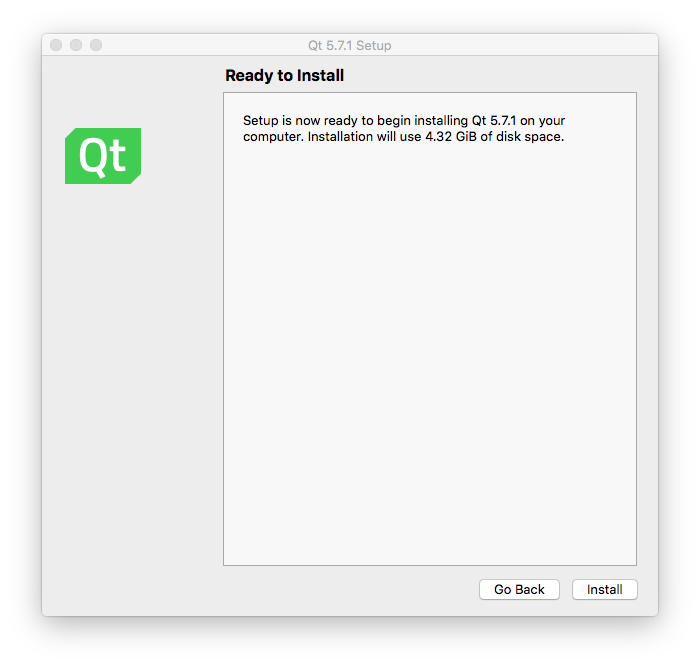 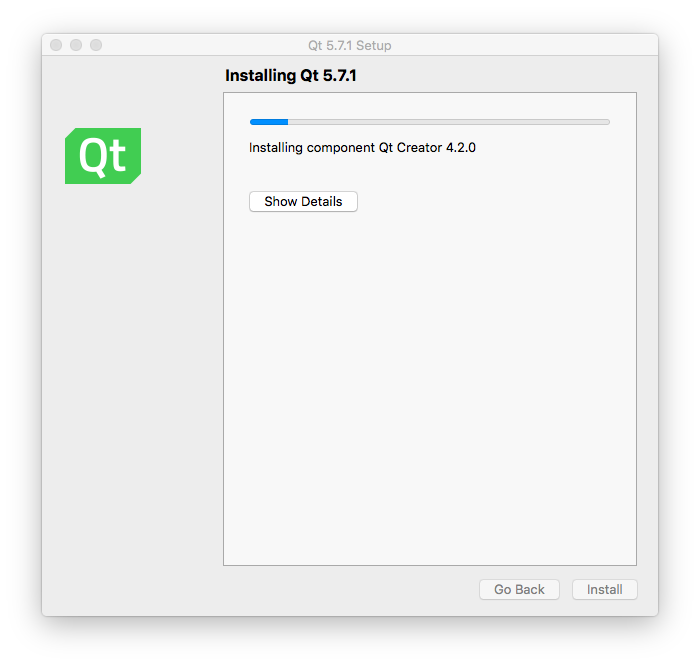 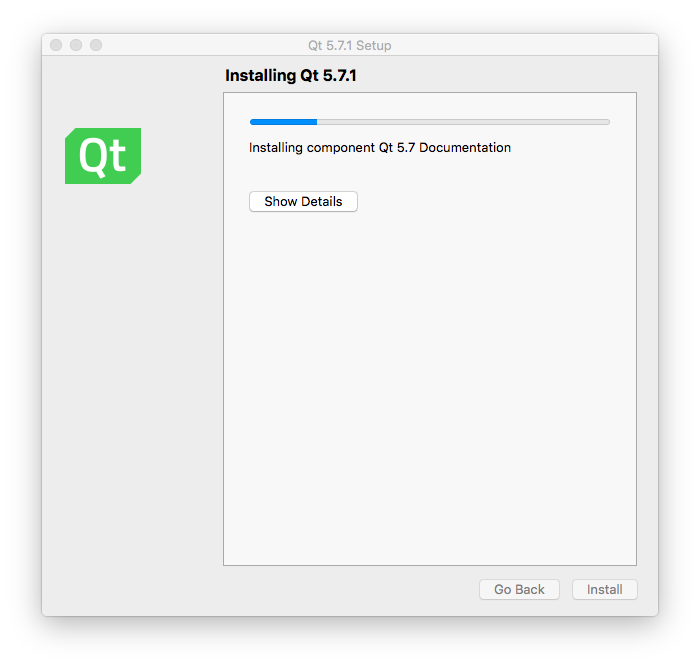 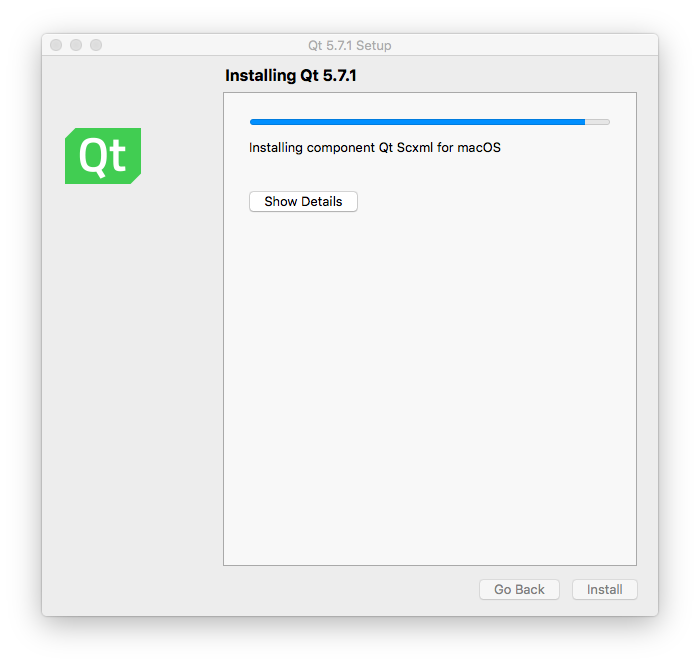 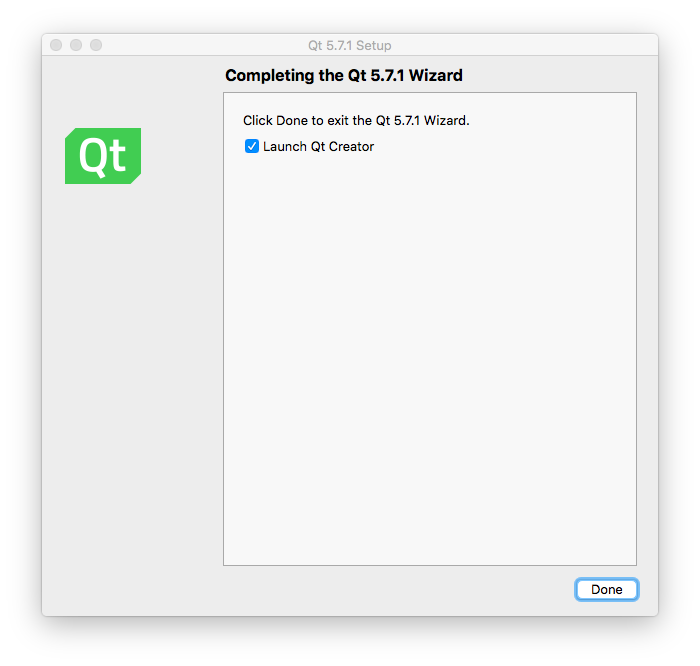 Once done, you can launch Qt Creator: 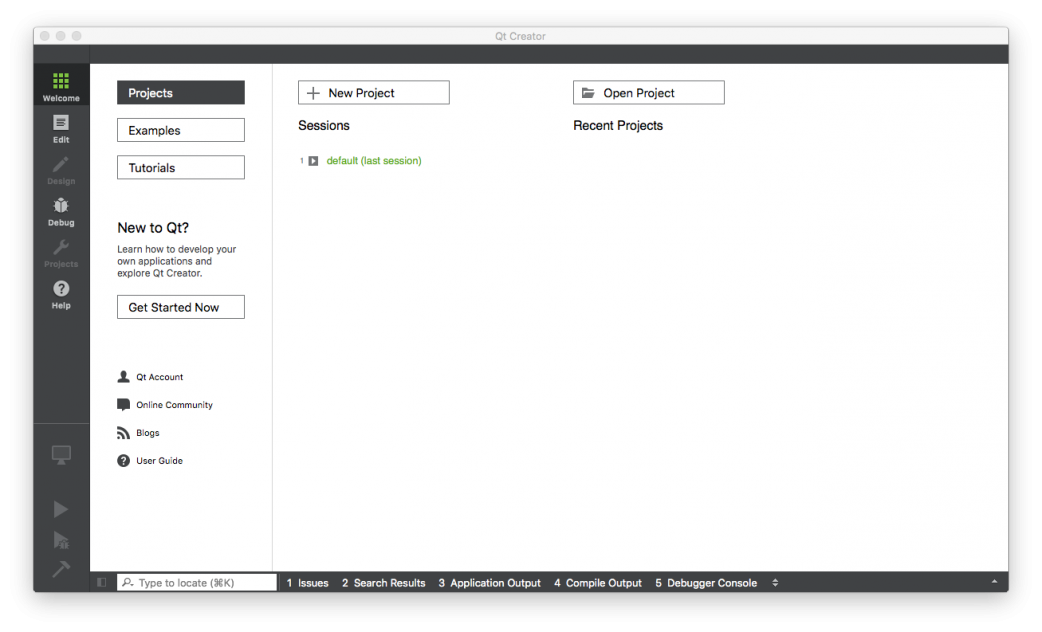 You should check that it correctly set up at an auto-detected kit with the compiler, Qt version, and debugger: 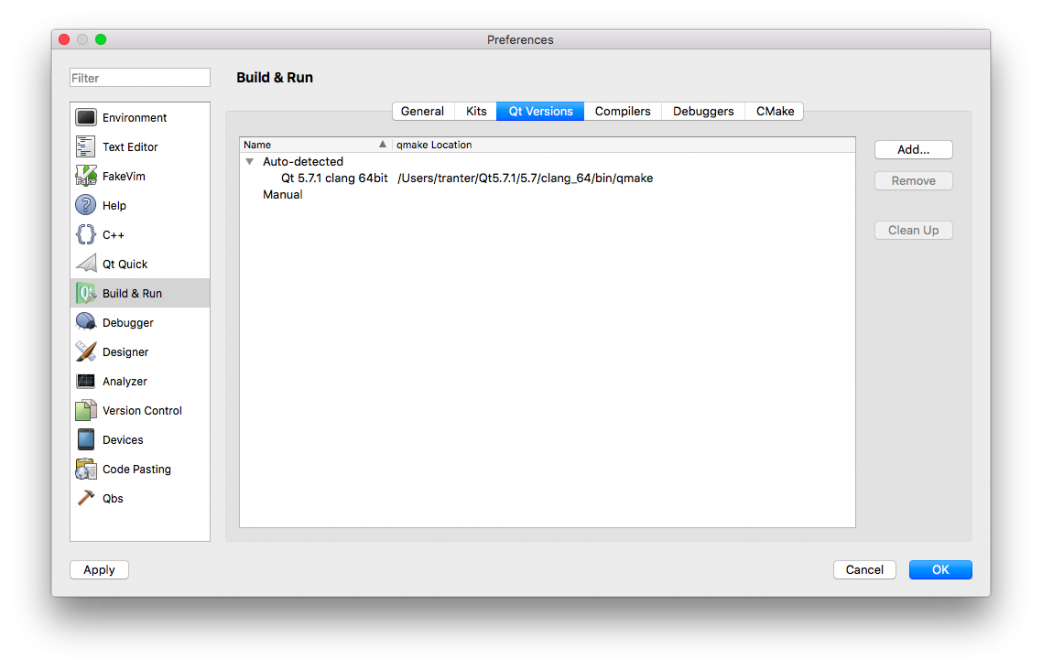 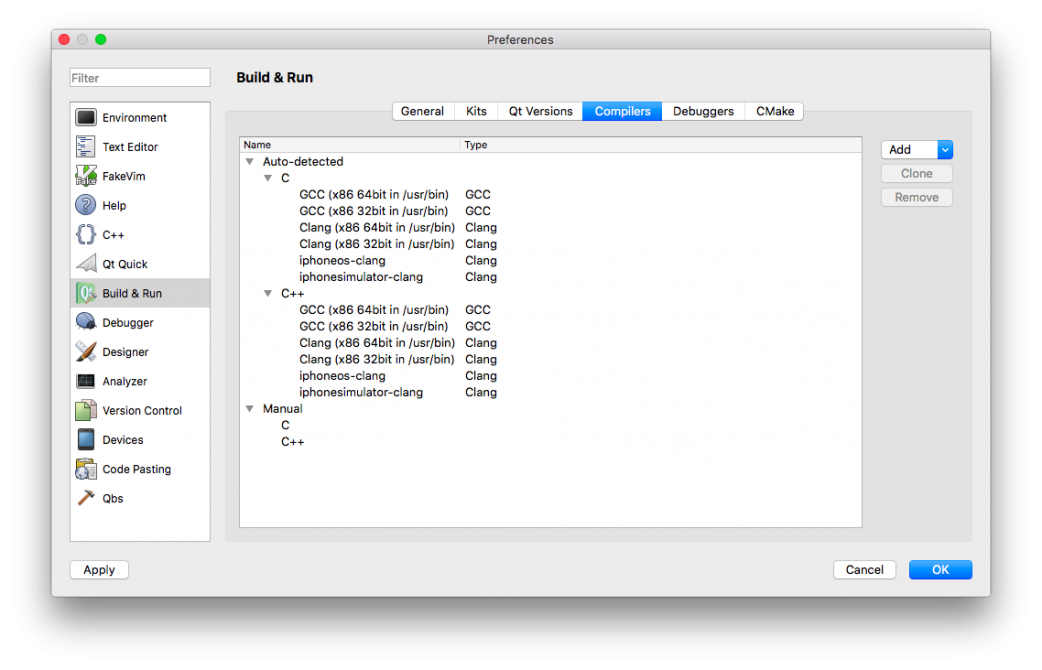 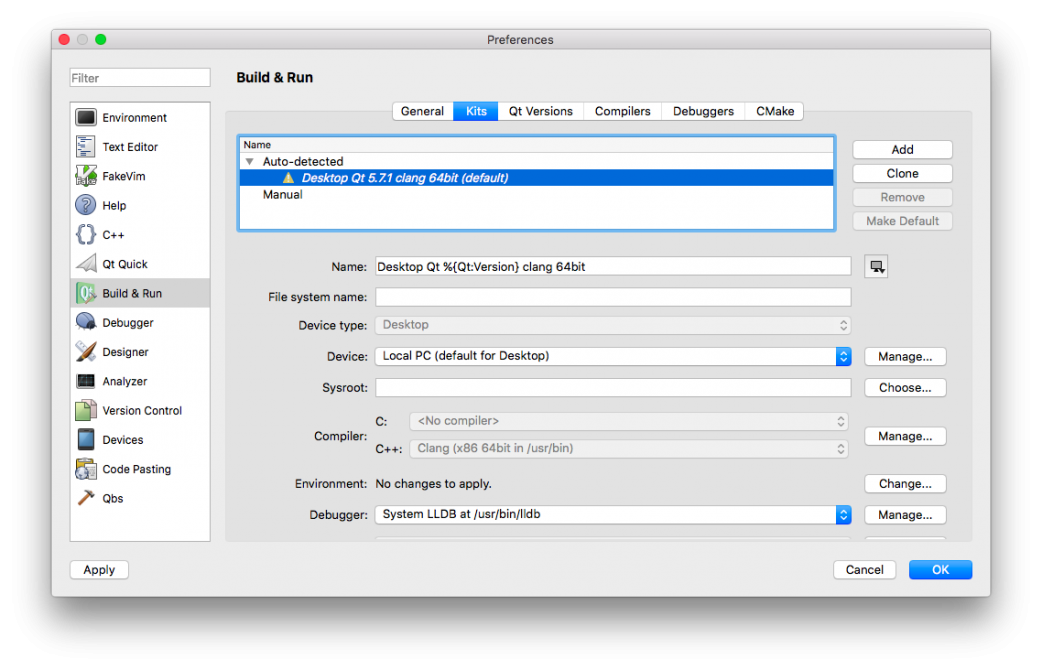 This is a good time to create some sample projects to test your installation. Use the New Project Wizard and confirm that you can create the project, build it and run the application. Testing both widget and QML-based projects is recommended. 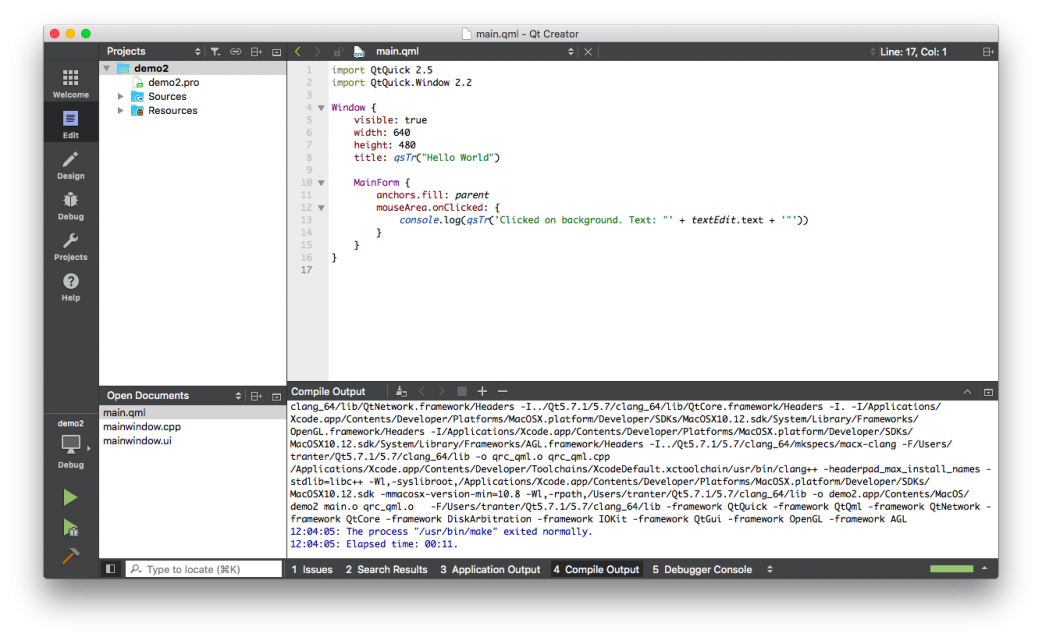 You are now ready for Qt software development on macOS. If you want to update, add or remove any components, you can run the maintenance tool, which will be found under the Qt install directory as MaintenanceTool. 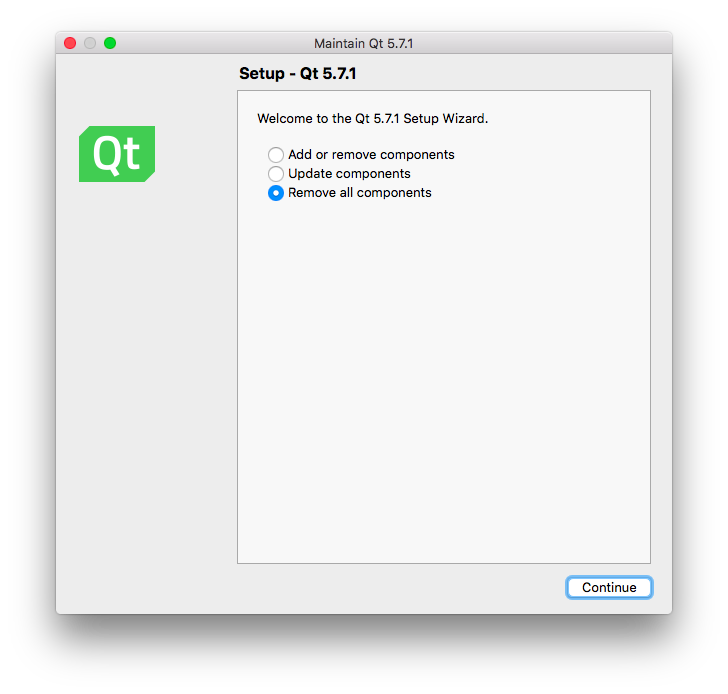 It's easy to get Qt up and running using the installer. I'm not a regular macOS user so on the occasions where I need to build a Qt application for the Mac, I appreciate that I can use the familiar Qt Creator IDE to do most of my work rather than having to learn another IDE.