Natural User Interface (NUI) is a concept that sounds simple enough at first but then it defies a simple, one-sentence definition. A command line interface (CLI) and graphical user interface (GUI) can both be described concisely, as in “the user types commands to the computer in the form of text” and “the user directly manipulates graphical representations on a computer screen with a pointing device.” A NUI, because it is not limited to particular input and output technologies as CLIs and GUIs are, have exponentially more possibilities for realization and thus are more difficult to define. 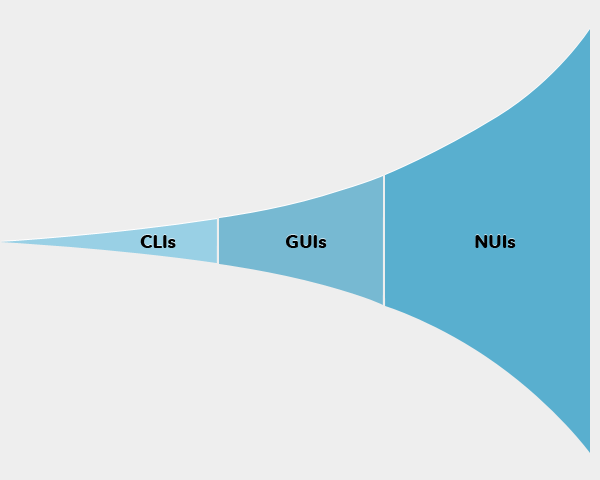 Many people end up latching onto one-line definitions of a NUI anyway, regardless of the need for more explanation: “it’s a gesture interface,” “it has multimodal interaction” or “it mimics real-world interaction.” These are not false statements about any possible example of a NUI, but they in no way indicate the range of possibilities that a NUI can encompass.

In contrast to these limited, one-line definitions, maybe it’s reasonable to say a NUI is any interface that is not strictly a CLI or a GUI. I’ve seen people operate by this tenet and although it’s mostly true and useful if one needs to categorize interfaces, it doesn’t clarify any reason for NUIs to exist. In other words, it doesn’t help, inspire or direct a user experience (UX) designer to create a reasonable NUI.

If I had to choose a one-line definition for a NUI, I like this one from Daniel Wigdor:

Although it is an ambiguous statement, at the same time it is completely to the point. The statement proposes a solution to the primary problem CLIs and GUIs have, which is, the user must operate controls to influence something (document, dataset, etc.), rather than interact directly with the thing itself. It suggests removing a layer of the interface to more directly and transparently access the content. It also suggests (and I may be stretching here) that if the content is what the user is interacting with directly than the content will behave in ways that allow the user to figure out or learn how to interact with it.

I find Wigdor’s statement useful as a tenet while I’m designing a UI/UX for a NUI. Asking the question, “is the user interacting with the content directly?,” helps me to evaluate each aspect of possible interactions and modify as needed to be more in keeping with the idea of natural interaction. It helps me to break the GUI habit, which is so ingrained in me at this point as an automatic solution to UI/UX requirements.

Compared to Wigdor’s one-line definition, other typical, brief statements about NUIs can be too limiting or even misleading. Definitions that refer to “interactions between people and their natural environment,” always bring to mind tangible interfaces or the need to copy the natural world, even though the intention of this definition is to put emphasis on the nature of the interactions and not the natural world itself.

Definitions that refer to multi-modal technology, such as touch or speech, suggest that a NUI is simply the addition of new modalities to existing user experiences, which of course is not true. Just adding more modalities to an existing GUI usually makes that GUI experience less pleasant and effective.

Definitions that emphasize that the user can “quickly transition from novice to expert,” or the idea that NUIs are learnable interfaces is confusing, because many interfaces now are easily learnable, whether they are NUIs or GUIs. Learnable user experiences can vary so greatly in their depth and breadth, that talking about them meaningfully requires more than a one-liner.

I’d like to leave you with two slightly longer, but good definitions of a NUI:

These definitions are still rich with ambiguities, it makes me wonder if NUI is simply too general a concept. After all, NUIs can encompass GUIs, tangible user interfaces (TUIs) and Social Computing. At the same time, the NUI is a very useful concept for the emerging state of UI/UX design.