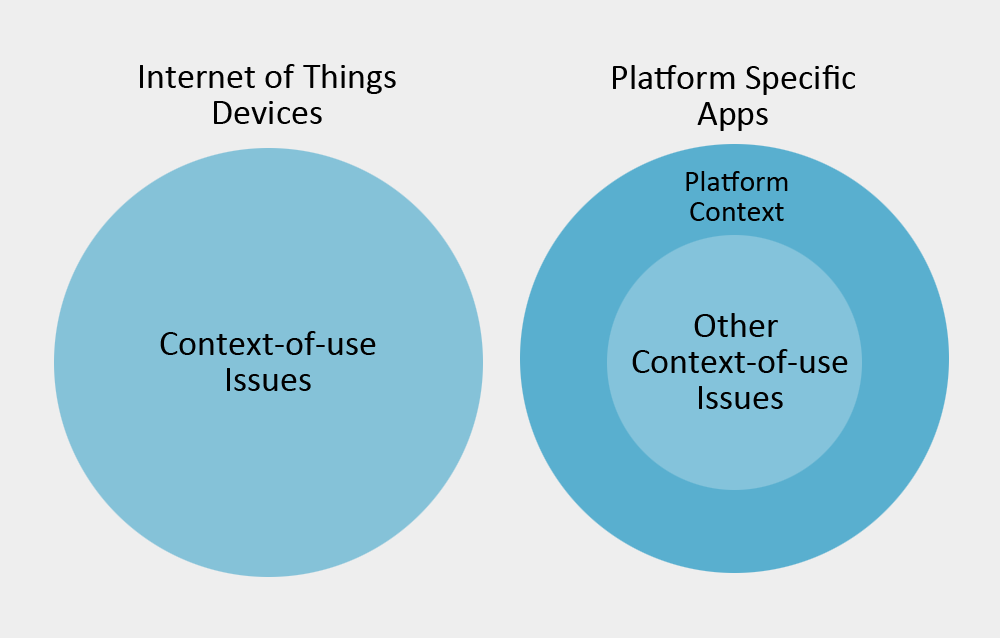 As the Internet of Things (IoT) proliferates, some user experience (UX) designers will migrate to working on unique one-off computer appliances rather than platform specific apps. On IoT projects there are likely to be more context of use issues to consider because:

Context of Use Definition:

“The context of use is the actual condition under which a given artifact/software product is used or will be used, in a normal day to day working situation.”(₁)

Examining context of use issues for a potential new product encompasses many levels of knowledge about an interactive “task” that will be performed.  For example, who will use it and why, when, where, what steps are needed, with what representations and on what hardware, etc. will need to be determined.

By contrast, let’s say you have taken on the assignment of designing a consumer heart rate device. Depending on the stakeholder’s requirements, you may be considering context issues such as:

Since you are designing an interactive experience that is not a pre-existing pattern on a pre-existing platform, it will require more scrutiny from you, the designer, on issues that an established platform would normally manage. In other words, you need to expend more effort on the context of use issues.

My favorite context of use examples for IoT devices are always the really obvious ones. For example, driving in a car is a very appropriate place to use hands-free, speech interaction. Conversely, the car is an inappropriate place for complicated graphical displays that encourage drivers to take their eyes off the road for too long. But recently I’ve learned something new about context and the process of designing IoT devices. It’s not just the fact that there are more issues to consider with these embedded devices, but the design process is impacted as well.

As lead designer at ICS, one of the projects I am working with is a retail sales kiosk authoring system called ViewPoint. The kiosk software is platform independent and it works on almost any screen size, although, it is most unique and impressive on very large screens. When the kiosk runs for end users, access to the familiar platform is blocked and they only experience the kiosk software, which is rightfully very different from a desktop experience.

However, our designers often work with the kiosk software on their desktop PCs running Windows. This has been the easiest, most efficient way to work even though it is not how end users will experience the kiosk. We also meet with storeowners and review issues regarding their kiosks, using a tablet or desktop device because it is convenient.

I have found this manner of working to be a problem, in that people will make decisions, forgetting the real context in which end users will experience the kiosk. They instead will take the prototype platform (which is a PC running windows) too seriously. Decisions will be made that are not appropriate for the context of use issues that we have already flagged.

Working on IoT products will mean more context of use issues will need to be considered compared to working on platform specific apps. In addition, it’s important to review designs in a real world environment, on the actual device, as much as one can in a physical place similar to final use of the product. The amount of extra time, effort and expense that might be incurred will be well worth it and result in a better product.