At Integrated Computer Solutions (ICS), we recently have begun marketing a touchscreen kiosk product that we call ViewPoint (www.viewpointkiosks.com). ViewPoint is a kiosk-authoring environment that currently runs on Windows 8, Android and Linux and can scale to various resolutions. As a result, it can be installed on various types of hardware and on various screen sizes and, a variety of housings can be selected. We have begun to deploy kiosks to customer beta sites and the user feedback and observations we have received are quite interesting.

As you might expect, size and angle of a display affects how users perceive or understand first, whether a device is interactive and second, if it has a touchscreen. Even if there is no boxy housing, but the kiosk screen is at a 45-degree angle, that says to people, “touchscreen kiosk – come and interact with me.” Users deduce quickly, in the absence of a mouse or keyboard, that the display is a touchscreen. Add some kiosk-like housing to confirm that it’s not just an ordinary computer and for sure, people know the device is meant for public interaction. However, they may still be likely to check around to make sure there is not an alternate way to interact, before trying to use touch. 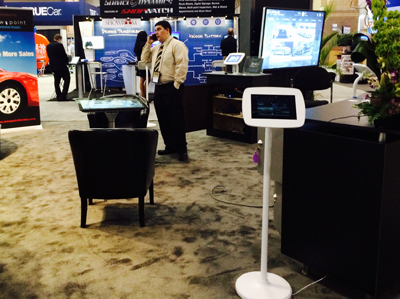 Interactive tabletop devices are almost universally assumed to be touchscreens, even though they are not that common. Maybe there has been a saturation of commercials showing people using the cool new technology of tabletop touchscreens so that it is more understood by the public to be standard. I would suggest instead, that tabletops are at such a natural angle to use touch and it would be very awkward to interact with a tabletop display with a mouse, although it is possible.

Touchscreens mounted vertically on a wall or stand, remind people of a TV and so they are more reluctant to assume it’s interactive at all. Users are shy to touch if they aren’t sure if a large display is a touchscreen. Within certain contexts, such as a science museum, users may be already cued into the idea that exhibits are meant to be tried and touched. However, in other environments like retail sales, where kiosks are rarer, it is necessary to resort to messages to the user, such as a timeout loop on the screen that encourages the user to try out the device by interacting with touch, or even a sign that says, “This is a touchscreen.”

Nevertheless, wall-mounted screens can have a much more dramatic impact in a space then angled screens or tabletops, because they can be seen at a far distance across a room. If they are visually appealing, it makes them all the more attractive and in certain contexts, this is very significant. When we deployed our first kiosk to our first beta site, which is a retail sales environment, we delivered a 22-inch touchscreen, oriented at a 45-degree angle. We received feedback from the customer that the kiosk was being used and people liked it – a tepid review at best. After a few weeks we delivered a 72-inch, wall-mounted touchscreen. Almost immediately, the customer asked if they could get more of the large touchscreens. The effect of the large, visible screen was dramatic in a large retail space. People were attracted from across the room to come closer and eventually interact with it. The kiosks were immediately much more popular.

Wall-mounted touchscreens, although they are less immediately recognizable as an interactive device, have the advantage of a wide zone of viewability. They can be seen from a far distance and attract people to come closer. People can observe others interacting with the device and benefit from another’s exploration of the information. They can then approach the device and interact themselves.

Screen angle helps people understand what a device is, whether simply a display for viewing or an interactive, touchscreen kiosk meant for interaction. However, there is no one solution that works best for every context. The importance of size and visibility needs to be taken into account when choosing which type of configuration is best suited to any given environment. The angle of the screen also affects the overall user experience (UX), depending on the content of the interface and the kinds of gestures available to the user (tapping, scrolling, dragging, multi-touch). Watch for my next blog, for more on this topic.