My last blog post on the Raspberry Pi was written last April, when I covered the release of the Raspberry Pi 2. Since then, a number of things have happened in the Raspberry Pi ecosystem and I thought it was an appropriate time for another update. Here is a list of some of the events that, in my opinion, were of interest or were significant over the past few months. 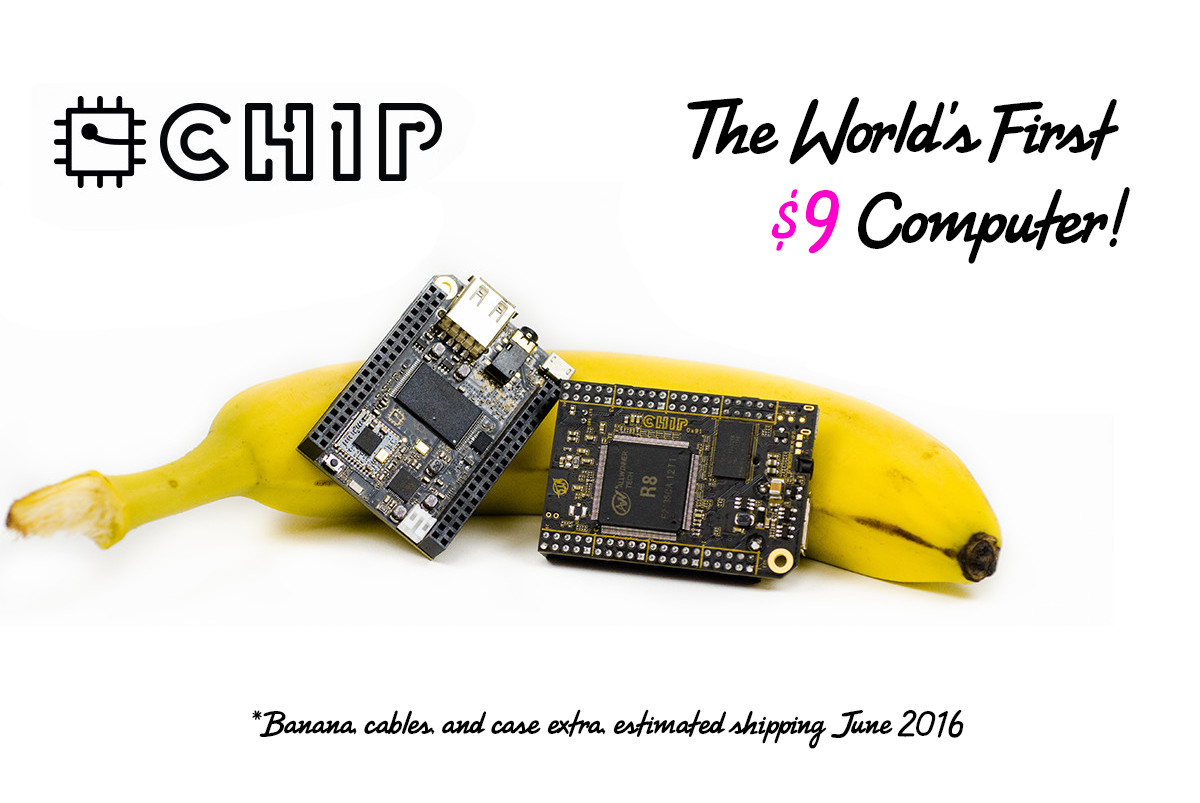 There was some speculation that the price reduction was a response to other low-cost computers that have come on the market, such as the $9 CHIP computer (1). As we'll see shortly, the Raspberry Pi Foundation had an even lower cost model in the works.

It is a 7-inch display with a resolution of 800 by 480 pixels with 24-bit color. As a capacitive multi-touch touchscreen, it supports up to 10 touch points. It comes as a metal-backed display with an adaptor board and mounting holes for the Raspberry Pi. Using the on-board DSI display connector on the Raspberry Pi 1 or 2 models, it works out of the box with recent versions of the Raspbian Linux distribution. It retails for a price of US$60. 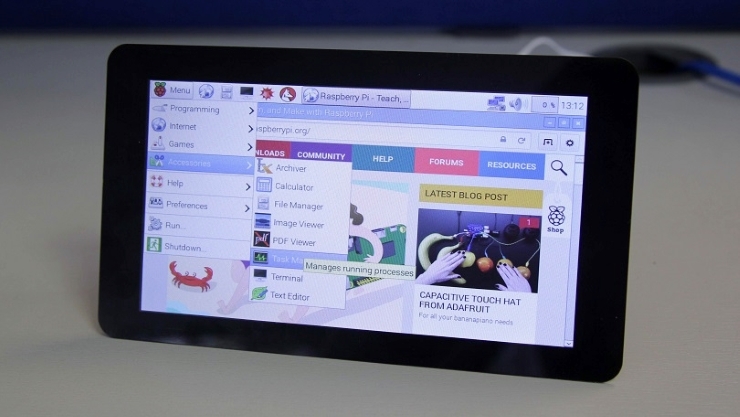 In my experience, it works quite nicely and the multi-touch works well with Qt 5. The 7 inch size is relatively compact, while still being large enough to run many desktop applications.

My only complaint might be that the assembled unit is quite thick, at about 1.5 inches, making it difficult to turn into a tablet-like device. It can also be a little fragile unless you place it on a stand or in some kind of third party case. 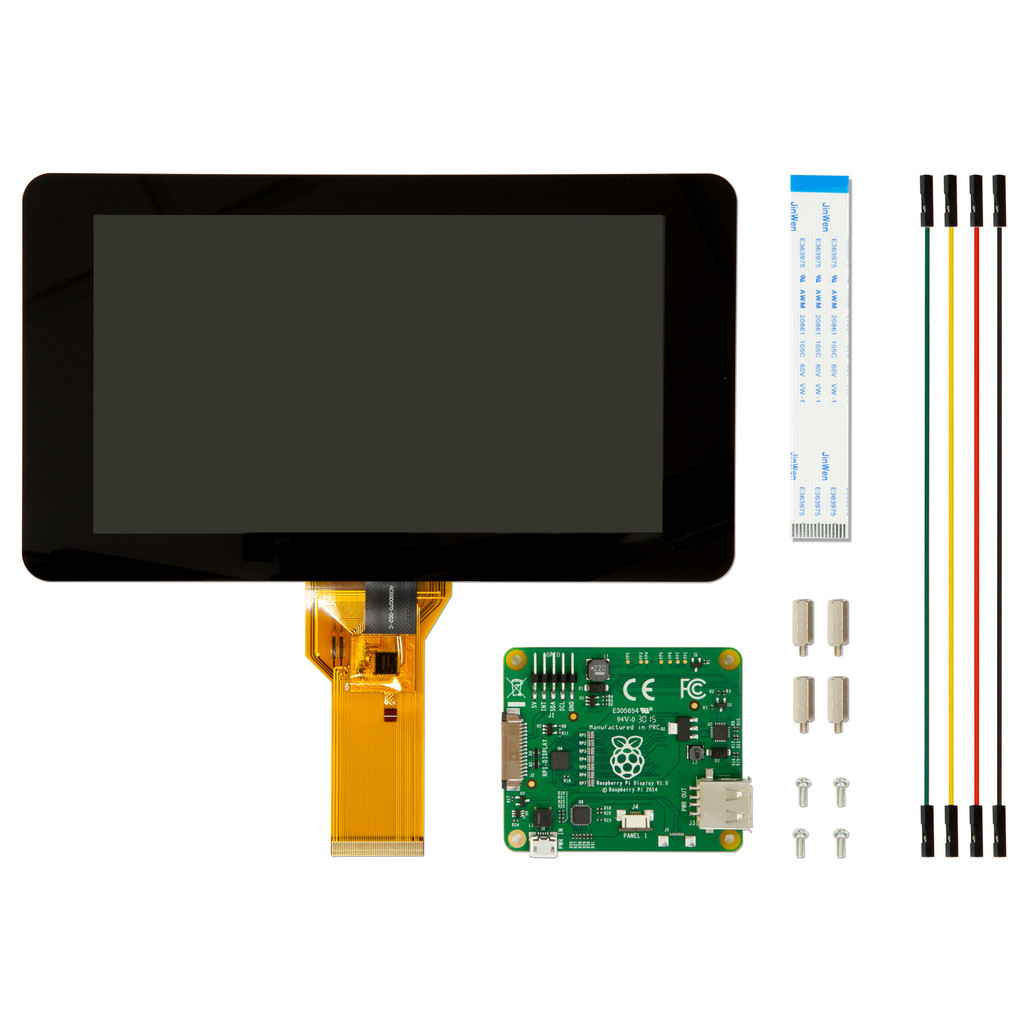 At ICS we offer a course (2) on Programming with Qt for Embedded Devices and we recently switched to using the Raspberry Pi 2 and touchscreen as our hardware for this course, as it is reliable and cost-effective.

Once of the main goals of the Raspberry Pi project is to bring low-cost computing to as many people as possible. At $20 to $35, the current models are affordable to many people, but price is still a barrier for some. In 2014 the Foundation began work on an even lower cost device, and in November the Raspberry Pi Zero was released at an amazing cost of $5.

For that price you get a Broadcom BCM2835 processor that runs at 1 GHz (40% faster than Raspberry Pi 1) with 512 MB of DRAM and a micro-SD card slot for mass storage. It uses a mini-HDMI socket for video output and micro-USB connectors for data and power. It also has an unpopulated 40-pin GPIO header compatible with previous Raspberry Pi models and an unpopulated composite video header. The form factor is smaller than the previous models, at 65mm by 30mm by 5mm. 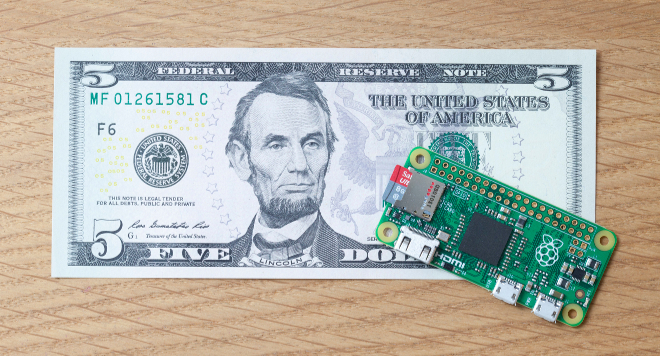 What you mainly give up, as compared to a Raspberry Pi model 1 or 2, is the Ethernet port and the camera and LCD connectors. You'll also likely need to purchase cables or adaptors for the mini-HDMI and micro-USB ports.

You may have trouble getting hold of a Raspberry Pi Zero, as most of the suppliers were sold out the first day, despite there being tens of thousands produced before launch day.

The low cost, small size and low power consumption of these units started me thinking about some embedded and IoT applications. How about a parallel processing system made up a cluster of few hundred of these?

The MagPi (3) is the monthly magazine of the Raspberry Pi community. Launched in 2012, it was originally an electronic magazine only, but is also offered in print form and is available from many distributors. The downloadable PDF version is free.

The December 2015 issue arrived in UK stores on the same day as the Pi Zero launch, and to commemorate it, the hardcopy magazine includes a Pi Zero inside, the first time in history that a magazine included a free computer.

The Raspbian Linux distribution is the recommended operating system for the Raspberry Pi. Based on Debian Linux, it continues to be updated with new versions of core components and software applications. Earlier this year a new image was released that is based on the Debian 8.0 "Jessie" release.

There continues to be more options for alternative operating systems that you can run on the Raspberry Pi, including a version of Microsoft Windows called Windows 10 IOT Core. There is a derivative of Ubuntu Linux supporting transactional updates called Snappy Ubuntu Core, and a desktop version of Ubuntu running the MATE desktop environment.

The Raspberry Pi is now literally out of this world, as two Raspberry Pi computers with special add-on boards were delivered to the International Space Station. British Astronaut Tim Peake is currently using them to perform experiments which were created and coded by school students. 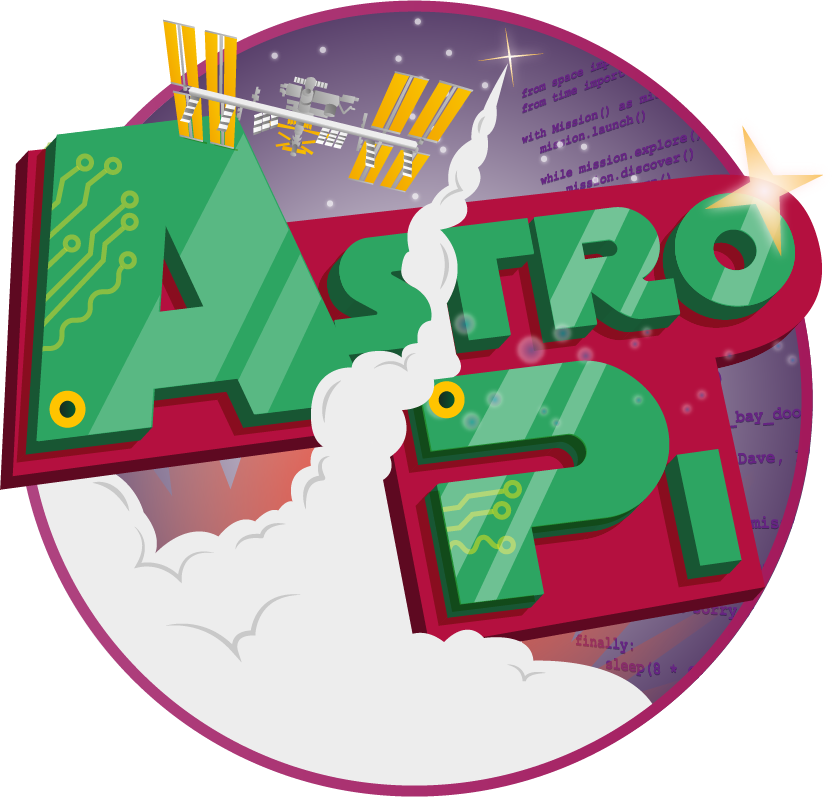 You can read can read more about the Astro Pi project (4) at its web-site.

The Raspberry Pi ecosystem continues to include many third-party add-ons and accessories. For example, just one distributor, Adafruit (5), lists 292 different products in the Raspberry Pi category.

Many things are happening in the Raspberry Pi community, and I've only touched on a few of the recent highlights. You can stay up to date by following the Raspberry Pi Foundation web-site (6).

I would like to close with one performance tip. The Raspberry Pi uses SD or micro-SD cards for file storage. The speed of the flash card can have a big impact on performance. Some recent testing by a Raspberry Pi user (7) demonstrated that there can be an order of magnitude (i.e. more than ten times) difference between the performance between low-cost no-name cards and slightly more expensive ones. You can read the blog post for performance measurements made with specific cards.