People love to play games, which explains why clients keep asking us (the folks at Integrated Computer Solutions) to develop games for them to use at trade shows and conferences. We’ve built a wide variety of game types, including target games, races, puzzles, 3D immersion and competitive games. For this year’s Computer Electronics Show (CES) we whipped up a captivating package-delivery game for Indiegogo showcasing the products and services of its client Ingram Micro, which offers technology and supply chain services to businesses around the world. Here’s how we did it.

This race-style game pits two to four players against each other. Their mission is to deliver a package from one global city to another city by answering trivia questions. Players advance by answering quickly and correctly. To get started, contestants scan their conference badges on the controller tablets and confirm their name and email. The group is automatically assigned a destination city and a package to deliver. Then the game begins. After the players complete their delivery they are greeted with a “Thank You for Playing” prompt and asked if they would like to know more about Ingram Micro and/or meet with a representative. Here’s what the game looks like.

Here’s the basic recipe for the game we built. It can be easily adapted for whatever you’re cooking:

Set oven to bake, 8 weeks total. Design for three weeks. While design is cooking, write code for a month and then let simmer with QA for a week. Pour into oversize touchscreen and serve while hot. 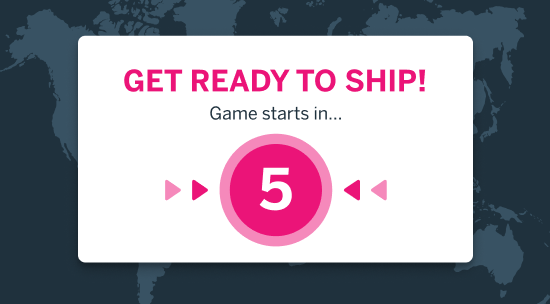 The central part of the game, the server gathers and shares data and handles the interactions between all the game elements. The server is also responsible for management of the players, the questions, the travels and the scores. Therefore, it’s essential to break down the server into multiple components that have their own defined roles  so you you don’t end up with an enormous chunk of code that will be impossible to maintain, or can’t be extend if needed.

For our game, we split the server into four parts:

Our server is made in Node.js and we used a tool called pkg to package it into an executable file that makes installation easier since it can run on machines that don’t have Node.js installed.

The game map allows the audience to watch the action on a large screen while the players are focused on their controller tablet. The game map includes both a map of the world and the paths the player have to complete in order to deliver their packages. We used the GPS coordinates of city airports to ensure all the cities are placed accurately on the map.

At the beginning of each game, the server sends to the map the starting city and the destination for each player. During the game the players move at a steady pace along their path to their destination. But receive a speed boost during a brief, specified time during game play for correct answers. The game ends as soon as the first player reaches his or her destination. At the end of a game, the server sends the scores and ranking of each player to the map, which displays them for the larger audience.

Since the tablets used to actually control individual game play are running on Windows, we built the applications with React.js combined with Electron. This approach allowed us to compile them into a Windows application with an installer and to use a configuration file in which the address of the server is written. This way we don’t have to recompile the application when the server’s address change. But these applications can easily be built in React Native or Flutter.IO, which means they also can run on iPads or Android tablets.

The player application is quite complex because it needs to run on multiple tablets at the same time to play in real-time. We created six different states for the application so the server always knows where each player is. These states are:

To play a game, the application uses the controller-tablet’s camera to scan the QR code printed on a player’s badge, and then sends a POST request to the lead API of the conference to fetch the user’s data. This way players don’t waste time filling a form on the application. (However, that functionality is enabled in case there are connectivity issues with the API).

If you want to create an engaging interactive game, you’ll need:

And if you want to go the extra mile, consider adding a server discovery feature. Right now, the applications need a configuration file with the address of the server in order to connect. This means that when you set up your game at a trade show or event, you’ll need to retrieve the server address and edit these file. In the event you didn’t set assigned the server’s machine with a fixed IP, you’ll also need to edit the configuration file when the IP change. By adding a server discovery feature, which lists all the available servers on your LAN, you can get rid of these configuration files.

Use this recipe to create your own delicious masterpieces!