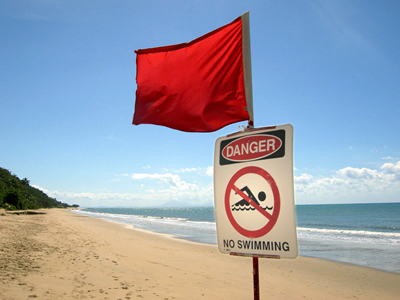 When designers create user experiences, red is the color most often chosen in interface design to draw attention and signify an alert or warning. A message in red text might say, “Email is a required field” or “Invalid username or password." Sometimes red is just used to draw attention. The question becomes, is red especially suited to this task, or just a handy contrasting color that is not often used for primary interface elements?

Why does red work this way?

Red is the color of blood and fire. It is also associated with danger, pain, adrenalin, energy, strength, power, determination and with hunger, passion, desire and love. It’s no surprise that Coca-Cola’s logo color is red; Coke is an energy drink. Red suits Pinterest as a logo color, since Pinterest is all about things we love. Approximately 80% of world flags have some red in them and red appears in flags more frequently than any other color. We can assume this is related to projecting an image of strength and power.

In two experiments, researchers studied the effects of viewing the color red on the strength and speed of gripping actions. In the first experiment, thirty subjects were each given a number written in either red or gray crayon on white paper, which they had to read aloud before pinching open a metal clasp. In the second experiment, forty-six subjects were shown the word "squeeze" on a computer screen, displayed on a red, blue, or a gray background. They then had to squeeze a handgrip as hard as possible.

The researchers found that viewing red enhances strength output on simple motor tasks of a brief duration. The subjects who saw red numbers in the first experiment exerted more force in the grip experiment. Subjects in the second experiment, who saw the red background, squeezed harder than those who saw blue or gray ones. Also, they reacted more quickly when the word was on a red background.2

This research speaks to the adrenalizing quality of red. However, red is also very noticeable. It is the easiest color to detect within a field of other colors: “Of all the inputs the eye receives, small spots of red light are the most easily detected. Although the eye and brain may fail to discern subtle changes in illumination, even slight shifts in the red-green spectrum are obvious.”3 These qualities alone substantiate that red does make a good alert color for interfaces.

But here are some other things about red that may add more fuel to its emotional power:

The study of languages tells us that all languages have words for black and white, and if there is a third hue recognized, it is red.1 That fits well with what we have mentioned about red so far, that it is highly noticeable and stands out from the field of other colors. You might wonder if red was the first color that early humans evolved to perceive, but the opposite is true, at least for our primate ancestors.

It is almost certain that no other mammals, up to primates, have color vision. Full color vision requires three types of “cones,” or cells in the retina of the eye that are sensitive to color and intensity of light. Most mammals have just one, the blue cone. South American primates (spider monkeys, squirrel monkeys and cebus monkeys), possess two cones, the blue and green. Only African primates (macaques, apes, orangutans) possess three cones and have red vision.4

For the last century, scientists have held the dominant theory that red vision was an evolutionary adaptation in higher primates that allowed for better distinction of ripe, red fruit against green foliage. Recently this long held theory has been challenged by a possible alternative theory, that red vision enables us to read facial color cues revealing emotional and physical states.  “Oxygenation of the skin” causes red flush, brought on by anger or passion. Conversely, lack of normal pink or peach tones and having a gray or green cast to facial color can mean illness and the need for emergency action.5 This new theory suggests that an emotional reaction to seeing red may be instinctual, in order to prepare us to fight or flirt, or even save a life.

For we humans, seeing red does appear to instinctively, put us on alert. Red is the appropriate color to use in an interface to get our attention or to raise an alarm. However, 8% of the male population have a red-green color vision deficiency and cannot see red at all. So UX designers need to keep that in mind and add additional visual cues, such as outlines and shading to alerts and warnings. Using red sparingly within UX design will make sure it does not leave the user “seeing red".