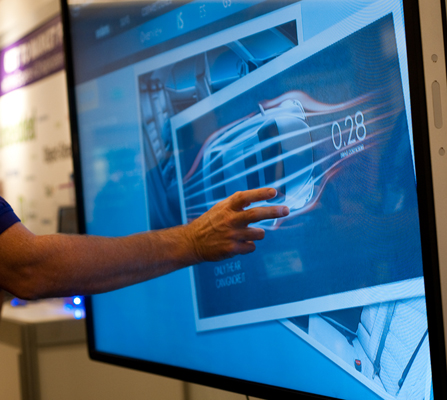 When installing a touchscreen kiosk, the angle of the screen is a major consideration. First, it affects how quickly people perceive the device as interactive and also touch-enabled. (See my   previous  post, Is That a Kiosk? How to Best Position Your Public Touchscreen Display for Use.) Second, it affects how comfortable it is for users to perform touch gestures.

On a mobile device, the angle of screen is a non-issue because the user can hold the screen in whatever way is most comfortable for them. They can also change the angle depending on the task they are doing and/or the gestures they are using. I would guess, based on informal observation, that an approximate 45-degree angle is the most commonly used hand-held position.

A kiosk on the other hand, is most often installed with a fixed screen position. The decision of screen angle needs to be made based on a combination of issues, such as usability, security, stability and visibility of the device. In the case of our kiosk (www.viewpointkiosks.com), a wall-mounted screen that affords maximum visibility is preferred. We’ve had the opportunity to observe others as well as test ourselves, performing various tasks on the 90-degree angled screen.  Below is a summary of our findings so far.

Tap, flick and swipe gestures are easy on a wall mounted screen and appear to present no issues. Tapping is universally the easiest gesture to perform at all angles. Flicking and swiping also are easy at the 90-degree angle and are particularly fun at that angle on a large display. However acceleration/deceleration of interface elements is affected by the size of the screen and needs to be  adjusted for proper speed or all the fun is lost. If the speed of a flicked or swiped element is too fast, it’s difficult to control it and if the speed it too slow, it requires too much effort by the user to  get the element to move.

Dragging, like swiping, is simple and fun at a 90-degree angle on a large screen.  Dragging, however, can require a more sustained effort than just swiping and can be overall more strenuous to perform on a screen in this configuration. Since arms are involved in the movement and the 90-degree angle of the screen requires arms to be used around shoulder height, physical effort can be an issue. To moderate the possible effort required to drag an interface element around the screen, it is necessary to adjust the drag weight for it to feel comfortable to the user. The pinch/unpinch gesture is slightly uncomfortable at a 90-degree angle. The combination of holding arms up and holding hands at the 90-degree angle is tiring and awkward, but doable for short durations. It’s definitely easier to perform with two hands than with one. This is partly due to the screen size and partly due to the angle of the screen.

Typing presents the biggest challenge at a 90-degree angle. For a small amount of data, it is about the same amount of un-comfortableness as pinch/unpinch. If a user performs a one-finger technique, it is similar to tapping and is not really a problem for a small amount of input. Even so, that amount of one-finger technique can feel tedious. However, if a user resorts to some form of touch-typing, they would probably complain – as the angle of the screen makes it quite uncomfortable.

Typing on large, wall-mounted screens is largely an unexplored terrain. Our user experience (UX) team is actively experimenting with some options to improve the usability. Some ideas we are testing are: 1. a movable keyboard, so the user can place it in a location that is most comfortable for them to type; 2. placing the keyboard at different angles and rearranging the keys and; 3. making the shape of the keyboard different (long, tall, or in pieces). Stay tuned for more updates on our progress in kiosk keyboard experiments in my future blogs.