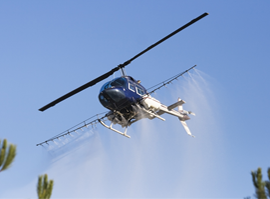 A global mosquito control solution supplier was ready to replace their popular but decade-old aerial mosquito control application system with a new version that would take advantage of faster hardware and responsive high-resolution touchscreens. The re-envisioned solution would automatically provide pilots with accurate guidance to and through the ground zones set to be sprayed with chemicals, while accurately avoiding other pre-determined zones to limit risk to public health and wildlife.

The client made several requests. They wanted the new system to work equally well on fixed and rotary wing aircraft. They asked for a user interface that was intuitive and easy-to-use both day and night, and capable of delivering a rich visual representation of current guidance, map data, and “spray,” “no-spray” and “already sprayed” zones. They also wanted a simple, reliable means of backing up mission data and upgrading system software. Plus the system had to be able to create a detailed log of aircraft movement, weather conditions and spray operations for each mission that could be securely retrieved for debriefing and analysis.

ICS provided both UX design and engineering services, assembling a team of C++, Qt, OpenGL and QML developers to tackle critical software implementation tasks, and visual designers to ensure the UI was on point. Quickly ICS’ UX experts created a prototype of the application’s UI that significantly improved on the previous generation of the system.

The ICS team also developed a fluid and responsive guidance system that accurately displayed vector and raster geographical maps, as well as spray and no-spray zones, sprayed areas and guidance information, taking advantage of data from weather sensors and GPS. The application can turn chemical spraying on and off automatically based on aircraft position relative to the spray zone. It also allows for manual control when pilots deem necessary.

Other key features include functions that allow the pilot to save fuel and shorten flight time; an option to either use existing spray zones or define new ones on the fly; and an integrated obstacle awareness subsystem relying on FAA obstacle data.

The new system, currently in the final stages of field testing, has created a buzz in the industry. Mosquitos, you’ve been forewarned.

QtSerialBus: Using Modbus and CAN bus with Qt - Watch now!

Come work with the best team of Qt developers in the industry! Full-time and contract positions available.