If you are not yet honing your design skills for the Internet of Things (IoT), I’m about to light your fire. I don’t generally buy into technology hype. As designers, we tend to remain calmly skeptical about incitements coming from our business and marketing departments. However, the predicted growth and market penetration of smart devices is frankly staggering. I can only imagine that user experience (UX) design skills for smart devices will be in huge demand.

Before the introduction of smartphones in the early 2000’s, IoT devices were estimated at about 50 million worldwide. The emergence of the ubiquitous smartphone has hugely increased the number of smart, connected things currently in use and pushed the IoT into more of a reality. Achieving reality in this case means going from millions to billions.

Predictions for the IoT market value are colossal, which makes sense based on recent technology innovations. The IoT has the potential to overlay whole consumer, business-to-business and governmental industries with a distributed layer of computing power, sensors and devices. Although consumer applications will drive the number of connected devices, as it did with the proliferation of smart phones, enterprise will account for most of the revenue. 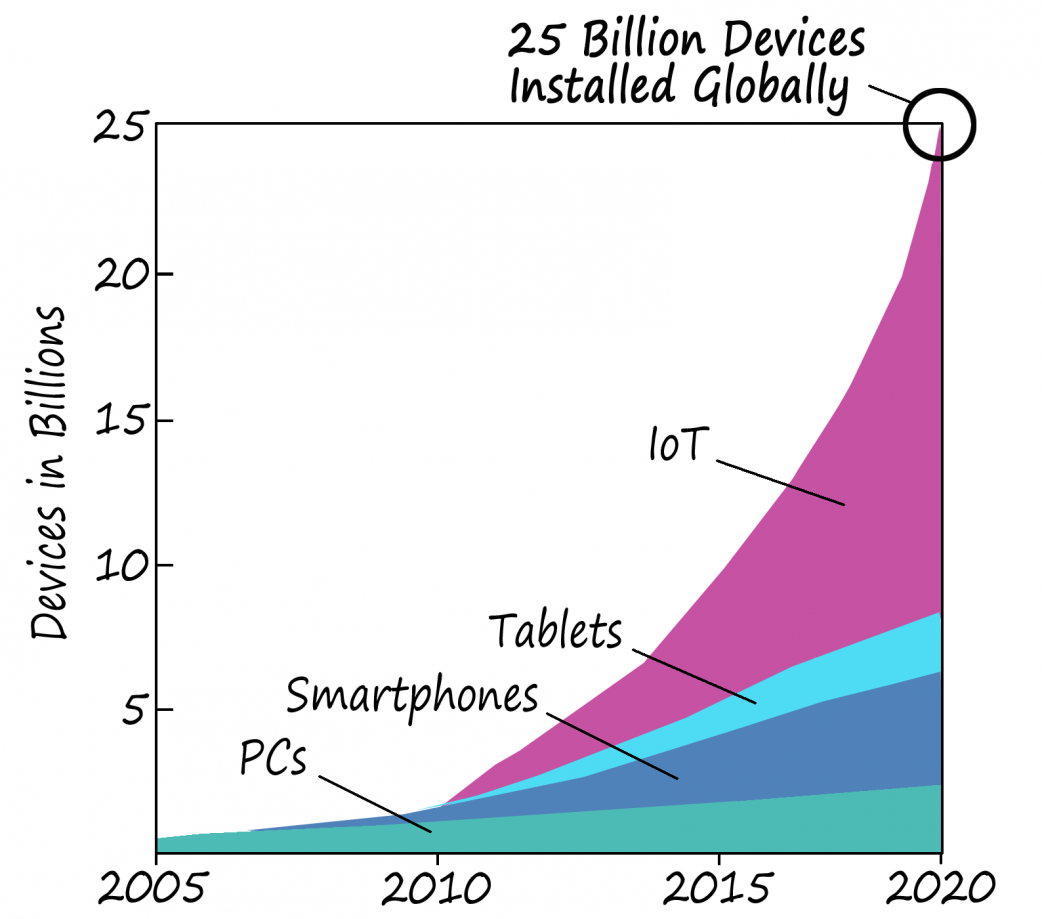 Is it all just hype to get businesses to invest? A recent Forbes post suggests that there are logical reasons why business is converging with IoT technology at this point. Technologies often have a lengthy incubation period when the promise of that technology is perceived as obscure and future-based. Then its emergence from research to product and its resulting sudden prominence creates frenzy even though the technology has been steadily developing for years. (3)

As one might expect, Moore's Law comes into play as well. The price of sensor technology has dropped considerably, as has processing and networking technology, making connected services and devices viable business investments. In addition, the wide availability of Wi-Fi makes it easy to connect new devices and access new services. (3)

Do these dramatic predictions about the growth of the IoT cause you to consider reassessing the timeliness of your design skills?  The IoT is an exciting and creative opportunity for designers to help shape our collective quality of life, as we live and work in a hyper-connected reality.

Where do you begin to examine what new skills you may need? Here are three basic starting points you can consider:

Context of Use – IoT devices can be anywhere and for any purpose. They are a departure from products (desktop, laptops, tables, phones) that exist with basic context of use issues already solved. So questions such as display or no display, size and shape and appropriate modalities need to be addressed for each unique device. (See blog: IoT: Context of Use Just Became More Important ).

Gestures and Speech Modalities – Not all modalities work well in any context of use. For example, using touch interaction while driving in a car is not the safest activity, while speech allows the driver to keep their eyes on the road. While mouse use on laptops and touchscreen use on mobile devices is the standard, IoT devices have no standard modality. It is up to the user experience (UX) designer to find a good solution for a particular device.

Divided, Peripheral Attention – The proliferation of devices means that users will have much less attention for any one device. Also, many devices will only require peripheral attention unless there is a problem that needs a users response. It’s a different way of thinking about UX than personal desktop and mobile interfaces. (See blog: IoT: Living in the Periphery of User Attention).

IoT is the next evolution of the Internet, which takes advantage of its ability to gather, synthesize and share data to connect a myriad of smart devices and systems from refrigerators to building maintenance systems and from parking meters to traffic control systems.

What will you do to prepare?