The Internet of Things (IoT) will be an opportunity for new kinds of user experiences (UXs) to proliferate - smart, ambient, minimal and wearable. These new interactive experiences will need to be very appealing and easy to use. In other words, these new devices and systems must possess a very high level of usability; users/consumers have come to expect that. This is good news for designers because it ensures that their skills will be highly valued as the IoT grows in scope and size.

However, employing high UX standards are not the only factor at play here. The number of IoT devices and systems is predicted to grow exponentially in the next 5 years. (See: http://www.ics.com/blog/internet-things-are-your-user-experience-design-skills-speed)

Obviously, the sheer quantity of projects requiring UX will increase, but does the advent of the IoT mean more attention and effort to UX design will be needed in general? In my opinion, yes, it definitely does, because striving for easier to use, more natural user experiences is a complicated design problem. 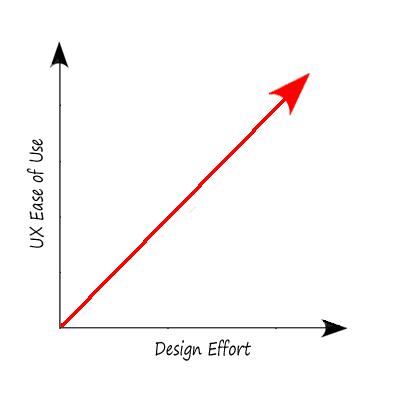 Having been in the field of human-computer interaction for a long time, I can say from personal observation that the demand for increasingly better-quality user experiences requires increasingly more work effort on the part of UX designers. Sometimes non-designers believe that “better” technology will make designing a UX faster and more automatic, but so far this has not proven true.* Instead, more sophisticated technology means there are more options for designers to work with, or more ways a UX can go bad in the absence of a designer. As technology increases in complexity, UX design knowledge will need to increase in complexity to employ the new technology effectively.

Complexity requires organizing structures and the field of UX has developed its own theoretical and tangible structures, in this case, hardware and software. On the theoretical level, interface paradigms pre-solve design problems. A design paradigm such as a Graphical User Interface (GUI) or Natural User Interface (NUI) establishes a set of principles which guild and constrained a UX design. Design paradigms are often born out of the capabilities of available technology, and then influence the direction of the product platform design.

Software platforms pre-solve many UX design issues for application designers. For example, designers who are creating a Windows 8 or iOS app with their respective platform widgets are essentially working with a construction kit. The low-level functions have already been selected and designed as part of the platform components, and the immediate design problem becomes strictly high-level, or how to apply the platform widgets to accomplish a particular task.

The IoT is a new frontier, utilizing some preexisting platforms, but many new platforms are being created that have little preexisting infrastructure for UX design. Expect some chaos for a while.

Let’s take a product such as a wearable fitness device and let’s say it has a one button interface, or no button interface - how hard would that be to design? Figuring out how to make an interface very simple and elegant, yet still workable for many types of users usually requires more design work than proliferating a complex preexisting interaction pattern, such as a desktop GUI. It’s a different kind of work, the first requiring more thoughtful innovation and user testing, the latter requiring more pure elbow grease.

Easy to use means the designer has taken care to give appropriate cues to the user, predicted every possible action a user might take and constructed appropriate feedback responses. All error cases are then managed.. In a less than easy to use experience, a user may have no clue how to interact and may find an error situation that they cannot reverse. Generally, as UX designers, we can expect to expand our knowledge and work harder as the need will increase to make simple the complexity that will arise to meet the challenges of an ever-expanding IoT.

*It’s conceivable that at some time in the future software can become smart enough to be self-designing, using acquired knowledge, observing user behavior and then modifying designs. It would be a kind of smart evolution. We are very far from that.