The historic modernization program links soldiers to a wide range of weapons, sensors, and information systems behind an interface that ICS helped create. 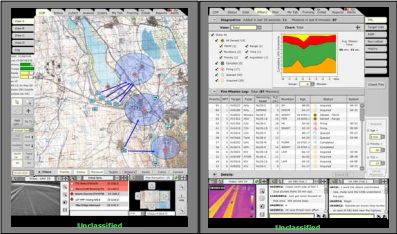 The most comprehensive weapons modernization program in U.S. Army history is now underway and ICS plays a critical role. The program is designed to enable integrated battlefield engagements by everyone from unit commanders down to individual soldiers and out to adjacent units. Whether assessing overall unit readiness, directing over-the-horizon artillery or going door-to-door to clear insurgents, warfighters linked to modern sensors, systems, weapons and communications can make — and act upon — informed coordinated decisions in split-second time.

It is no exaggeration to say that everything this multi-billion dollar program contains is there for two reasons: to enable 360° awareness of battlefield situations, and to enable an immediate and appropriate response. That is why the role ICS plays is so critical. ICS, under contract to Boeing, provides needed expertise to interface program-enabled assets with the people whose lives depend on them. 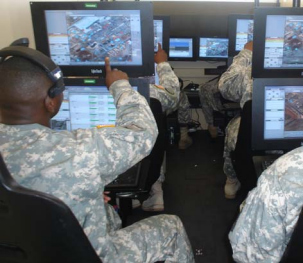 The Army Brigade Combat Team Modernization Effort’s warfighter-centered design brings together needed information to form the highest levels of situation awareness in a consistent, easy to use form. The Warfighter’s Machine Interface (WMI) is how everyone within the Army Brigade Combat Team Modernization Effort receives information, controls equipment and communicates with one another in battle.

According to Richard Fuller, Boeing’s WMI Program Manager for Element Services, “This is probably where a soldier is going to spend 99% of his time — interfacing with what we’ve built.”

It all needs to be clear, and also highly reliable. “You can imagine, you’re on a mission operation and an Error 404 message comes up," he said. "That’s the last thing you want to see.”

To make sure the WMI is both highly reliable and clearly understood, Boeing partnered with ICS for expertise in Qt®, the WMI technical foundation. Qt is used to build platform-independent, advanced graphical user interfaces. Key to that technology are “widgets,” such as the buttons, dials and tables used to control systems and view information. Boeing asked ICS to create widgets that went significantly beyond those available out of the box from Qt.

The widgets are the primary interface for the soldier — with unmanned air vehicles, unmanned ground vehicles and other weapon systems. They are the primary interface with the weapons systems themselves, as well as with all the other roles that have been identified within the program’s Brigade Combat Team. "We realized that some of these widgets — or primitives as we call them — were going to be heavy duty. And so we asked ICS for help," Fuller said. "They’ve been on our team since 2005."

“We recently asked the ICS team to build a small portal containing a table of warnings, cautions, alerts and notifications. Each one has a different color. Each has a different criticality. And all the warnings must float to the top because they have the highest criticality and they are all flagged with red. Yellow would be next, and so on. And within a group of red or a group of yellow we also wanted them to be ordered chronologically. It’s a little more difficult than the typical data sorting. And it gave ICS consultants a challenge for a while."

“Imagine,” says Fuller, “a table that needs to be populated. You push a button that says ‘search’ and it goes out and finds the right database. It could be back in Kansas — or almost anywhere through the program’s network.”

The Warfighter Machine Interface (WMI) brings together the state-of-the-art in human factors practices with leading edge Situation Awareness-Oriented design processes and design principles. The data is accessed via mechanisms called channels and contracts, which are defined using the New Channel Editor.

“Pressing a button might mean ‘populate my 10x100 table.’ The software has to find the right sources, the right data, the right versions, and present it in the right way combined with all the other required data — all in less than a quarter second," Fuller explained. "ICS assisted Boeing in building those mechanisms.”

But just as the WMI called for technical competence beyond generic Qt skills, so too it requires more than just data mining. Boeing asked ICS to model data so as to create acute battlefield awareness. A good example, says Fuller, is urban sweeps for insurgents.

“Bad guys would reoccupy buildings after being swept so now sensors are left behind to detect anyone that might return," Fuller explained. "These could be seismic sensors, IR sensors — even unmanned air vehicles. Combining those data properly gives the warfighter a good three-dimensional representation moving in time of the city block he cares about. Presenting those data sources onscreen is harder than it may look."

So were the ICS consultants able to meet the challenge?

Boeing is the world's largest aerospace company and leading manufacturer of commercial jetliners and defense, space and security systems. A top U.S. exporter, the company supports airlines and U.S. and allied government customers in 150 countries.