A lot has changed in 100 years, but not your toaster. Most still rely on Calrod or Nichrome wire heat technology invented back in the late 1800s and early 1900s. Revolution Cooking is disrupting the kitchen environment by bringing toasting into the modern age.

"Traditional toasters are the countertop equivalent of a museum exhibit," says Revolution Cooking’s CEO Tom Klaff. "Most toasters use technology invented a century ago, which is painfully slow to reach full heat and dries toast to a cardboard consistency. We knew there had to be a better way."

To unlock a better toasting experience, this Massachusetts-based company spent five years developing a groundbreaking, proprietary heating technology the company dubbed InstaGLO® that reliably delivers a crispy outside yet soft, tender inside.

Revolution Cooking's inaugural product, the Revolution InstaGLO® R180 Toaster, was built to provide bread lovers with a superior toasting experience. Not only was the heating tech next-gen — the unit reaches full glow in two seconds, significantly reducing toast times — so too was the unit’s overall look. With a sleek design built around an eye-catching touchscreen that shows pictures of a variety of bread types to visualize the degree of toasting that would be achieved for each setting, the Revolution InstaGLO® R180 quickly captured the top spot in the smart-toaster market. 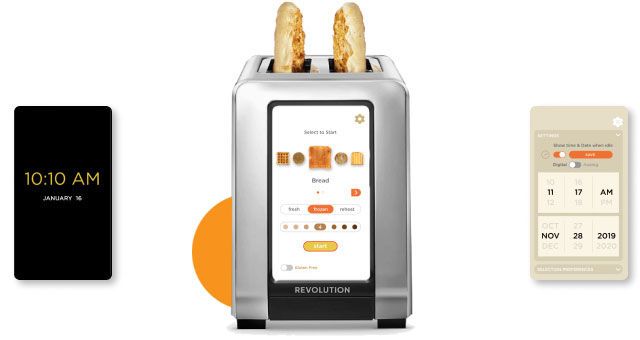 Because the product was already on the market, heavily promoted in upscale retail stores like Williams-Sonoma, Boston UX did not start the redesign with a clean slate. Instead, the team had to work within the confines of the existing design. Boston UX’s game plan was to respect — but improve — existing UI elements by reinforcing established patterns with enhanced visual assets.

Boston UX focused on microinteractions that felt comfortable and familiar to users, but still offered a little something extra. Boston UX also established a branded, recognizable set of workflows for cooking with Revolution Cooking appliances. The more pleasing and intuitive user experience impressed consumers and helped raise the bar for the company’s future products.

On the heels of this success, Revolution Cooking asked Boston UX to go deeper with design on a second existing product, the Revolution InstaGLO® R270 Toaster. For this more powerful and feature-filled toaster, which incorporates 34 bread types including Gluten Free, as well as modes for new panini press and warming rack accessories, Boston UX made some wholesale improvements in the UI while containing design efforts to the existing look and feel Revolution Cooking had already established. Boston UX also created and documented a brand-specific design system in Figma, describing in detail how users interact with the product overall and within each functionality.

"Boston UX demonstrated their value on an initial project, the Revolution InstaGLO® R180 Toaster, which made us feel comfortable that they were the right team to support our product line expansion. We have a deep sense of respect for the design team’s talent and are eager to collaborate again in the future."

With plans to revolutionize other areas of the kitchen, Revolution Cooking has once again partnered with Boston UX as a key collaborator in their next frontier of innovation. This early stage partnership allowed the design team to significantly evolve the UX and design language and firmly establish the "Revolution Cooking experience" via a set of common controls and interactions that work consistently across all of the company’s products.